LORD OF THE RINGS

In The Lord of the Rings™, The Battle for Middle-earth™ II, The Rise of the Witch-King *, the expansion pack** to the critically acclaimed, The Lord of the Rings™, The Battle for Middle-earth II™, players can now command the rise of evil in Middle-earth. With all new content from J.R.R. Tolkien’s original fiction, EA continues to expand the Lord of the Rings™ universe, offering gamers the opportunity to experience the epic battles that took place before those depicted in the New Line Cinema films. Expanding on every feature found in The Lord of the Rings, The Battle for Middle-earth II as well as boasting entirely new content. The all new single player campaign’s innovative new units will help to tell the story of the evil Witch-King’s rise to power, domination of Angmar, and invasion of the great kingdom of Arnor, home to Aragorn’s ancestors. To fully experience the evil side of Middle-earth, gamers can now play as the all new Angmar faction in skirmish, multiplayer, and War of the Ring modes. Experience a whole new depth of strategy with upgraded War of the Ring and Create-A-Hero features. Create-A-Hero’s entirely new Troll class boasts additional weapons and armour that will allow players to have even more freedom in customizing their game play. War of the Ring, the risk-style meta-game, offers upgraded army persistence, a new siege dynamic on the Living World Map, and unified territories that serve as major control points.

Lord of the Rings: TBFME II - Rise of the Witch-king Essentials 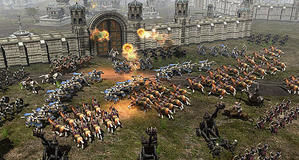