Crazy as it sounds, I've played through the entire game twice - hoping in vain that a second play through might alleviate the pains and frustration of the first. Puzzle Quest Galactrix has slick graphics, a cool soundtrack, some interesting but inconsequential sidegames, an bland storyline, a new multi-directional playboard that takes a little getting used to and, and, and, nothing else.

Occasionally there will be a cool encounter or two, but the game suffers from terrible imbalance issues, too much reliance on luck, a half-baked economics system, and loads of RPG-like "upgrades" you'll never use. You play the same board whether mining asteroids for materials and cargo (mostly a waste of time), picking up rumors (a complete waste of time), crafting items (hardly ever useful) and combat (can be good when you're not ridiculously overmatched).

Perhaps the greatest disappointment, at least when compared to its older brother Puzzle Quest Challenge of the Warlords, is that it isn't nearly as compelling or fun. It feels like a game that could have been great, perhaps rushed out before the above issues were fully developed or addressed. I don't know.

This is a game you will want to like but it just doesn't cut it. Maybe some ambitious modder will come along and recreate Galactrix into the game it should have been but by that time who will care? Pity this game lacked all the subtle brilliance of its older brother. You'll have more fun revisiting its sibling than you will hearing the expletives coming out of your mouth as you click "Retry" one more time after a battle. 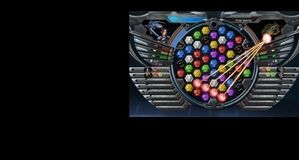