10 December 2008 | By Simon Priest
The Tony Hawk games were undeniably the King of the genre until EA's ambitious Skate came along and injected some much needed fresh blood and ideas.

EA's Shaun Laker has revealed they plan on thwarting the complacency of Tony Hawk by "listening to the community" and adapting to what works with players. Viva la Skate!

"As long as we keep putting out great games and don't rush it out and polish it and make sure we're listening to the community and hearing what they're having to say" they'll avoid becoming stale explains Skate's associate producer for environments, Shaun Laker.

"A big part of it too - and what drove our features this year - is we were finding out how people played the game. We know people play the game to find their own spot and to own it to be able to call it their own."

"This year, you can go and do that, and in a community, you can share it. That's how we stay fresh and we don't go too far; we listen to the community and know what they're asking for and respond to that," Laker added.

The Tony Hawk franchise is a genre veteran but even the recent inclusion of BMX bikes to help mix up the action wasn’t enough to breathe excitement back into the property. Activision now hopes a 'hands free' approach to the next title will solve their problems.

Skate 2 is being released on Xbox 360 and PS3 in January next year. 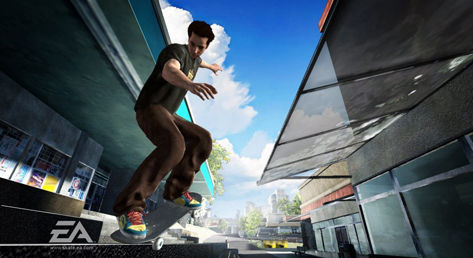