There'll be a dozen maps launched with the game on disc; more will undoubtedly flow through DLC later. Some Meatflag action anyone?

No - it's not some sordid new 'adult only' series of events but the new and Gears of War take on capture-the-flag. Instead of just pinching a stick with a wave bit of cloth at the top, you'll instead have to gun down a living computer controller hostile and thieve it back to base.

The tricky part is lugging this hunk of meat around slows down your guy and you can only use your pistol to defend yourself. If the 'meatshield' takes too many hits it will start flailing menacingly around at those closest by. If you want to dump the 'flag' you can stylishly snap its neck and make your getaway.

A series of finisher moves have been sprinkled in, like the ol flip-and-pummel - a true staple of any violent society. Of course if might be difficult to get in close with the introduction of things like the new metal bullet-shield, a portable shield and wall all-in-one.

You can drop it on the ground and along with the new and improved cover system; your limbs will be safely concealed behind cover - no fleshy exposures. With the steroid-pumped grenades now in, cover won't be your savoir for long - plus we can almost regress to a time of 'Goldeneye' proximity madness. Yes grenades can be rigged for more than just their boom; clever mass-killing machines will use them to stick to walls and even other players.

According to X360 magazine you'll even get to enjoy a good respawn this time around, though the more traditional dead-and-out will be in. Who wouldn't enjoy the thrills of duelling your Lancer online -- that's the in-game chainsaw attacked gun -- and who ever can prove their 'B' tapping skills are imbued by the gods, wins!

It's safe to say there's plenty of new multiplayer goodness coming with Gears of War 2, which is due exclusively on Xbox360 this November. 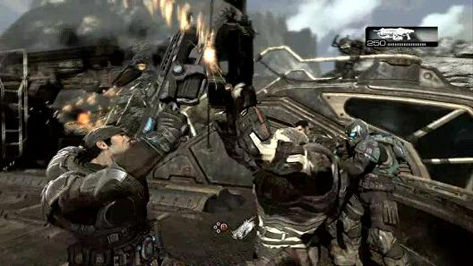