01 June 2009 | By Simon Priest
Activision is once again sitting at ESA's table which means they're buddies with E3 again, sort of anyway. Acti-Blizz held their press event yesterday.

Aside from the usual corporate self-back patting, they reveal Call of Duty is going to be expanding beyond the first-person shooter and StarCraft II will see a release date this year, possibly.

"Simply put, on Call of Duty, each year has been better than the year before," says Activision, obviously super proud of their crazily addictive war shooter franchise.

Both Infinity Ward's COD: Modern Warfare and Treyarch's COD: World at War surged the user base for the series with 20 percent of War at War customers being newcomers.

Blizzard's Morhaime believes the upcoming StarCraft II will likely launch this year, though a date hasn't been issued. He reiterates that more will be dished on Blizzard games this August at BlizzCon, which has sold out of tickets.

The rest talks some on Guitar Hero, DJ Hero, Tony Hawk Ride and throws some more figures around. I'm sure it comes as no shock that World of Warcraft is keeping the Acti-Blizz coffers well fed? 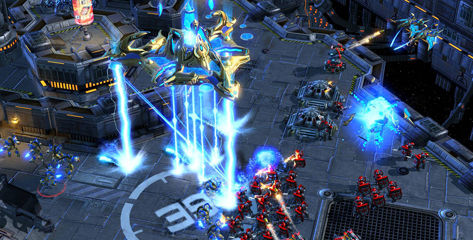