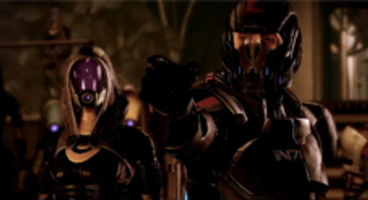 BioWare's Chris Priestly has revealed there's just too much "awesome" to fit on one disc, so Mass Effect 2 is split across two discs for all.

Actually there's a third if you count the Collector's Edition. The disc swap is "carefully planned" and happens only once on Xbox 360.

There's none to swap at all, unless you count the installation process, on PC. "Yes, there are 2 game discs for both the PC and Xbox 360 versions, both the Collector's and standard editions," posted Priestly on the official Mass Effect forums.

"There is a 3rd disc with the Collector's Edition. This is a movie DvD containing making of and other bonus information," he went on. "The PC version is a standard install. You install the information from both discs and then play with 1 disc in the drive. No swapping."

"The Xbox 360 does not have an install and does require disc swapping during play," explained the community coordinator. "Even though there is a disc swap, it occurs at a carefully planned place in the game (that does not interfere with gameplay) and is done once. You do not swap back and forth. 1 swap and then done."

Naturally there'll be some pitchfork and torches breaking out somewhere, and then the obligatory 'it wouldn't happen on PS3' rants. "Why 2 discs? Answer: Because you cannot fit this much awesome on one disc," he quipped. "Hope this helps."

Has your life suddenly fallen into a pit of despair from this revelation? Surely the return of Commander Shepard is worth the sacrifice of one instance of disc swapping?