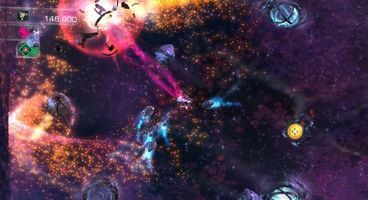 "Through the dynamic particle and fluid system the player faces a constant challenge." says Peter Ohlmann, Coreplay Technical Director. "The immense variety of effects, and the scope of the variables, makes Ion Assault a true next-gen game. It would simply not have been technically possible to implement this game concept on older consoles."

Ion Assault offers four scenarios with gorgeous, detailed visuals, each with different types of opponents, bosses, and background themes. In the course of the campaign players get to upgrade their spaceships and will, in turn, be able to affect power-ups that enable things such as an increase in ship speed, or an enlarged collected particles radius. Thanks to special power-ups, such as the ability to create temporary black holes, even large numbers of opponents can be dealt with. Players also get to show off their skills in various multi-player modes, and compare their scores to those of the world's best Ion Assault pilots through online highscore lists.

Birgit Hönsch, divisional manager of Games Publishing at RTL interactive GmbH, says: "We are very excited to be able to extend our portfolio by including a title for Xbox LIVE Arcade. Xbox LIVE Arcade is a strong platform for unusual games, and therefore is a perfect match for a title such as Ion Assault.”

She continued “With its innovative game principles and cutting edge graphics, Coreplay's arcade debut is the equal of other competitor products. With Ion Assault we not only open a new distribution method, but we also place Germany firmly on the map as far as cutting edge game development is concerned."

Ion Assault will be available for download in the summer of 2009 via Xbox LIVE Arcade, and priced at 800 Microsoft Points.