Square has dreams, wants to be "one of the top ten" in the world

28 May 2009 | By Simon Priest
The recent acquisition of Eidos by Square Enix is part of their much grander plan to be one of the top dogs in the world's "media and entertainment industry."

Yoichi Wada, big chief at Square, said that under their "own steam" it would take too long to mature, and so it became "essential" they find a Western studio. Wada-san looks beyond games.

"Our goal is to become one of the top ten players in the world's media and entertainment industry. Since the game market is global, both our contact with our customers and our game development must become global, too," President Yoichi Wada said in an interview.

"It would, however, take us a considerable time to mature into a global enterprise under our own steam. It was essential that we found a successful European or North American company to work together with, and Eidos proved to be the ideal partner."

It seems becoming number one in the games industry just isn't enough for Square Enix, they want to elbow their way to the top "in the worldwide media and entertainment industry," revealed Wada-San, who added it's "extremely important to have one's own original IP."

"Eidos is unique among North American and European publishers in its concern for producing its own IP. Not only does Eidos posses its own IP, but it has the ability and culture to create IP."

He continued, saying that not only was Eidos "an extremely attractive company, it was one with which we felt we were on the same wavelength."

With Square Enix now owner of Eidos it means they get their hands on Tomb Raider, Hitman, Championship Manager, Deus Ex, Kane & Lynch and Just Cause. Not bad, but not really world conquering IP either... 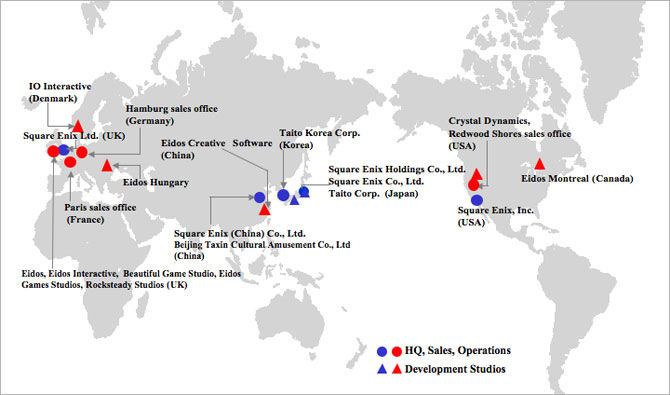