Hollywood 'figuring out' cheaper BioShock flick, to keep it "true" 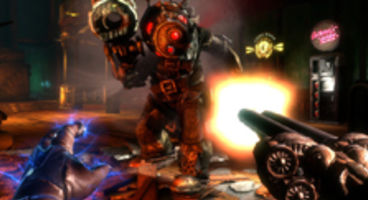 Producer Gore Verbinski, who's also a big director, has said they are trying to work a way to get the BioShock movie cheaper without going PG-13.

For the crew and cast of the flick it has to be "R, a hard R." They don't want it to become a silly light humoured romantic comedy romp in Rapture.

"We're working trying to make it. The problem with BioShock was: R-rated movie, underwater, horror. It's a really expensive R-rated movie," the Pirates of the Caribbean director, Gore Verbinski, explained to IGN.

"So we're trying to figure out a way working with Juan Carlos to get the budget down and still keep so it's true to the core audience, you know? The thing is it has to be R, a hard R," he said, talking about director Juan Carlos Fresnadillo.

Has the 'swing and a miss' Prince of Persia: The Sand of Time at the US box office poured huge doubt over the BioShock movie making a splash?

"No, I think BioShock's a rare one because it's actually a great story," he said.

"Me? I don't want to make movies based on videogames, but BioShock's the one Oedipal, crazy kind of -- it's just got really good bones, and we're really trying to figure out a way to make it work." The budget is where the problem lies - damn accountants.

What if Juan Carlos ups and goes from the project? Will Verbinski take the helm? "We're really down the road with Juan Carlos and right now it's really a budget thing and how to keep the integrity and keep it a Hollywood movie because it could balloon."

"It's a lot. Our first budget was extraordinarily high and we're working on it," he said, seemingly dodging a straight answer - meaning it's doomed if Juan Carlos quits?