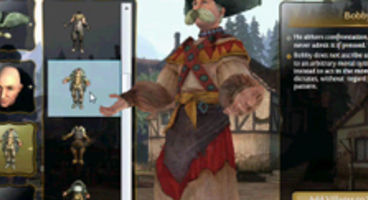 Bittersweet news for PC gamers looking forward to Fable III from Lionhead Studios. It will no longer be launching simultaneously on PC and 360.

Saw that coming did you? Well at least if you pre-order Fable III we get to create our own villagers, thanks to a nifty little personality Q&A creator.

"The console and PC versions are now on different schedules as we're focusing on building experiences optimized for each platform," said Microsoft. "We aren't announcing a ship date for the PC sku at this time, but expect news soon."

Fable III releases on Xbox 360 October 26th, with PC now in limbo and likely nearer Santa's one and only work day. To placate the masses we do at least get to create our own villager and have them added to our game when it eventually gets to shops.

This browser-based creator only works for those with a redeemable pre-order code that attaches to your Live account, as otherwise you can create but not see the fruits of your labour in-game. The Village Maker also lets you make wallpapers from them.

You can also share them over Facebook and Twitter - because they're all the rage. Are you all frownie face now that PC Fable III gets delayed? I know I am :(