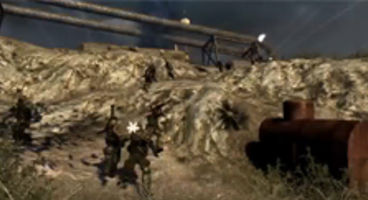 MAG developer Zipper Interactive have revealed the first DLC for their 256-player online shooter for the PlayStation 3, and it'll be out June 22nd.

It's called the 'Interdiction Pack' and is a 128-player mode, challenging two rival factions "to be attackers" and seize strategic points on 3 new maps.

The official blurb on Interdiction is that it supports 128-players and "challenges two rival factions to be attackers and seize control of three command posts with the aid of several heavily-armed convoys on three brand new maps (Lake Bayano Spur, Sovot Motorway, and Iron Cree Quarry)," reports CVG. A trailer has gone up as well which is below.

"To make it even more interesting, we've made all three maps completely faction neutral - allowing all sides to play any map whenever they want - in addition to supplying every squad with their own APC vehicle (that's 16 APCs on the map at once!)."

"To win, players must capture and hold as many objectives as possible to increase their score while concurrently depleting their enemy's," added Zipper. Also included in the DLC pack are new in-game medals, ribbons and trophies along with new armour.