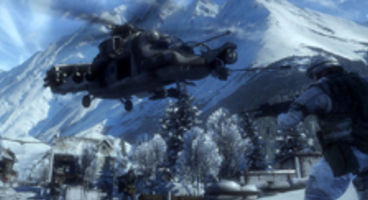 EA's upcoming Battlefield: Bad Company 2 will have its online beta kick off on PC this January 28th, where it will run until February 25th.

That's one whole month with its map, Port Valdez, supporting 32 players in the game mode 'Rush'. Pre-order it to get a beta place.

"The battle for Port Valdez is fought alongside the waterline towards a great oil industrial landscape in the Alaskan mountains. Using basically everything they've got the Russian forces are launching an airborne assault to knock out the oil industries in the area," blogged EA DICE, reports Eurogamer. A snowy map with plenty of vehicle and infantry action.

"In their arsenal there are Main Battle Tanks as well as fast-moving Quad Bikes and mobile armored AA. It's a vehicle focused battle, but with plenty of infantry combat."

EA are working with retailers to sort out a beta invite promotion but the best sure fire way to get yourself a place is to pre-order with the EA Store. DICE also reveal they're "working with Steam to have the Public PC Beta available on Steam, but can't confirm this quite yet so cross your fingers Steam users."

Battlefield: Bad Company 2 is releasing on Xbox 360, PS3 and PC March 5th in Europe, and on the 2nd in North America. Check out the multiplayer trailer below.