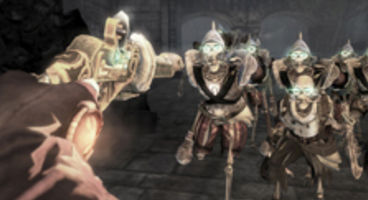 All is right in the world affirm Lionhead Studios because they're stilling making Fable III for PC, despite being very quiet about the SKU since the delay.

They'll be announcing more on the subject when they're "ready to do so," and not before. Fable III gets DLC next week as well as a title update.

"Fable 3 PC Version is still in development here at Lionhead so PC GAMERS don't panic. We'll announce details when we're ready to do so," twittered Lionhead Studios. Fans have been getting a bit antsy over no news trickling out over the PC version.

A title update for Fable III on Xbox 360 should hopefully arrive next week alongside the planned Undermine DLC, which adds a whole new settlement under Bowerstone. We can also spend MSP on a 5 star dog potion to make our furry friend super.

Fable III released on Xbox 360 last month. Sadly many have found game bugs marring an otherwise great new adventure to be had in the Fable universe.