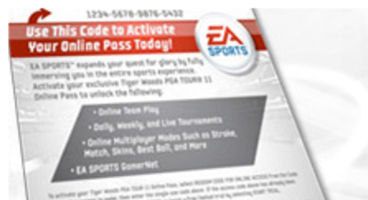 Charging second-hand consumers to access online features, like multiplayer, is EA's way to make some money off those darn preowned titles.

Sony reveals they like the idea and are considering a very similar system for their first-party line-up, saying they're "exploring actively" how to do it.

"On the principle of making online portions of the game available or unlocked from the disc-based release for a fee, we're broadly supportive of that," said Sony Europe's Andrew House. EA unveiled Online Pass as an extension of their Project Ten Dollar.

"And we're exploring actively the same option for our own content." This little 'moment of genius' from EA has already spread to publishers THQ and Ubisoft who are putting in place their own versions to reap income from the second-hand market.

"In terms of just a charge for basic online play, that's something that we have to talk about a lot more and we struggle with a little bit because we feel very vindicated and base a lot of the success of PSN today - a 70 per cent connection rate across consoles - on the fact that we've removed that major initial barrier to entry," continued House.

Sony is resistant to adding in Xbox Live-like subscriptions to access multiplayer. Meanwhile the newly introduced PlayStation Plus premium service for PSN is taking root for the corporate giant, and its uptake has beaten their projections.

"It's interesting that there's been a more significant uptake on the annual subscriptions than there has been on the three months subscription, with the exception of Japan," he said.

"I think that we need to remain hard at work on ensuring the content offering and the content flow remain strong. I have a sense that there is a second tier of PSN users that are almost ready to sign up that are in something of a wait-and-see mode because they want to see a bit more of the roadmap and how it flows out and is it meaningful to them? Which is absolutely fair enough." They can gather data from PSN Plus for third-parties.

"As with any of these propositions we've got to validate it first and then show them some good viable data on it," he offered. "There's overall amongst publishers, certainly with European publishing partners, a good open flexibility to talk about different models and actively explore them." Do you support an Online Pass system, videogamer?