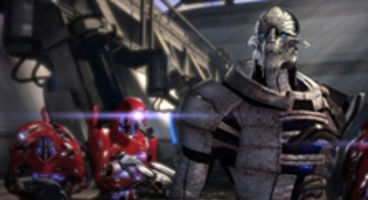 Hollywood studio Legendary Pictures now has the green light to get a script penned for EA and BioWare's action RPG Mass Effect for cinema.

Thomas Tull of Legendary says it's "ripe for translation," and praised it's "compelling characters" and depth. BioWare attached to produce.

Ray Muzyka and Greg Zeschuk will be executive producers on the flick project, as will Casey Hudson who executively produced the videogame. So that means BioWare aren't just taking a back seat on this - they get to meddle with Hollywood for our benefit.

Legendary Pictures has brought us previously movies like 300, The Dark Night, The Hangover and Watchmen. They will be sharing a purse with Warner Bros. to co-finance and distribute the Mass Effect film when it's done.

I Am Legend and Thor scribe Mark Protosevich is apparently a leading contender to write the Mass Effect movie script. Luckily for us gamers the ME universe is perhaps one of the best possible properties to translate well into a full blown epic movie.

The question is now... who will play Commander Shepard and fight the Reapers?