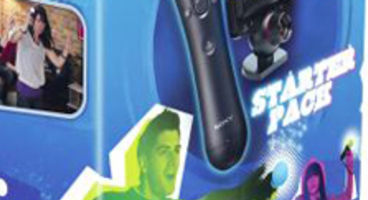 How many of the Queen's pennies it'll cost us Brits to get PlayStation Move has been revealed by Sony, as well as what's on the demo disc.

The Starter Pack includes an instructional video and 9 Move-supported title demos. You don't need the Navigational pad, a DualShock 3 will do.

The Move Motion Controller on its own costs £34.99, and the Navigational (Sub) Controller comes at £24.99, but this is optional assure Sony because a PS3 controller can substitute it. The PlayStation Eye camera is also £24.99.

You can buy the Starter Pack bundle for £49.99, which comes with a Motion Controller, PlayStation Eye and the starter disc. Aside from an instructional video, which I'm sure we wished Kevin Butler starred, 9 Move-supported demos are included:

PlayStation Move launches September 15th in Europe, and on the 18th in the US. It arrives much later on October 21st in Japan which is odd given it's Sony's homeland. Will you be picking up Sony's PS Move Starter Pack, videogamer?