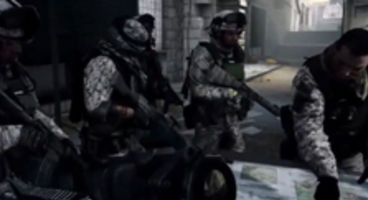 DICE's Battlefield 3 has EA weak in the knees as they believe it will grab a huge chunk of the first-person shooter market back from rivals, particularly one.

The Frostbite 2 engine is "reinventing the category" says EA Games' Frank Gibeau. It can do things that "haven't been done before", outshining the competition.

"We're super proud of the game. The Frostbite 2 technology is reinventing the category, and the Battlefield brand has its own persona and positioning, the multiplayer and squads...," said an excited EA Games label boss, Frank Gibeau.

"The combination of the brand and the technology and the quality of the DICE game is what we wanted to show tonight. We wanted to show unadulterated gameplay and show it for a long time, in February, and because we don't ship until the Fall it means we have a long time to polish it and make it extremely high quality."

"We're going to own what we do because we're going to leapfrog the category by introducing a whole new set of technology that's brand-new. The Frostbite 2 technology is going to help us do things in games and shooters that haven't been done before and will be tough for them to match," he went on, referring to the competition out there.

EA has already attempted to 'retake the hill' of the FPS market with the full Medal of Honor reboot which didn't manage to dent main rival Call of Duty very much at all.

"A long time ago, Medal of Honor was the dominant brand and created the shooter category, frankly, for consoles. I think it's our turn to start to get that back. It's going to take time and versions, and they are on their, what, 9th version of Call of Duty?" said Gibeau.

"I'm a believer in under-promise, over-deliver, and we're going to compete, we're going to be there." DICE developed Medal of Honor's multiplayer component.

The conflict and tension between EA and Activision over the shooter space is only a good thing for the industry as a whole he argues. "We're here to compete. Everyone loves a heavyweight battle. It's good for the industry, it's good for the customer – there's a lot of energy and hype and fun and comparisons," explained the EA executive.

"It's always good to see how you can energize a market by looking at how one guy can up the other. That's kind of what we're doing here." EA showed off gameplay footage of Battlefield 3 in a trailer at this year's GDC in San Francisco.