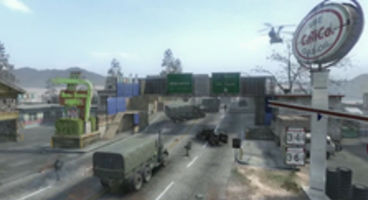 It rounds off to about 986.42MB which features four new maps as well as the zombie-filled 'Call of the Dead'. It hits Xbox 360 first as part of a 3 year deal.

Don't worry that doesn't mean it won't be on PS3 and PC for 3 years, it means that any DLC for Black Ops released over the next 3 years will be getting a period of exclusivity on Xbox 360. Microsoft and Activision struck a deal with many dollars involved.

"That’s it folks. Downloading #Escalation right now on my Xbox 360. It may take time to hit your territory, but… It’s here!" twittered Treyarch's Olin.

Hotel, Convoy, Zoo and Stockpile are the new online maps included in the Escalation pack, as well as a welcome return for zombies in new mode 'Call of the Dead'. The map pack is 1200 MSP and can be queued up through the Xbox Live Marketplace site.