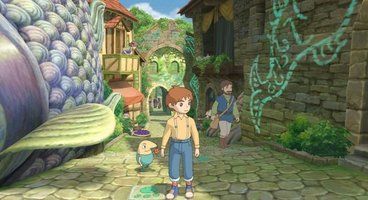 One of the more intriguing roleplaying games coming to the PlayStation 3 in Japan, Ni No Kuni, will be getting a North American release, albeit a localized subtitled version, instead of localized with Western voice actors. The game will be called Ni No Kuni: Wrath of the White Witch in NA.

The reason the game is so anticipated is that it's a collaboration between Pokemon developer Level 5 and famed Japanese animator Hayao Miyazaki's Studio Gibli, which is famously known for such animated films as Spirited Away, Howl's Moving Castle and Ponyo.

According to the official description of the game: "Ni no Kuni puts players in the role of a 13-year-old boy whose mother dies as a result of his actions. This, obviously, leaves the boy very sad. One day, a fairy appears before the boy and gives him a book which promises to lead him to the mysterious world of Ni no Kuni. In this world, which exists in a different time frame from the real world, the boy attempts to save his mother...

The world of Ni no Kuni actually runs parallel to the real world. Players will be able to travel between the two. Characters who appear in one world appear in the other as well, but with different roles..."

The game is due to be released on the PS3 sometime early next year.