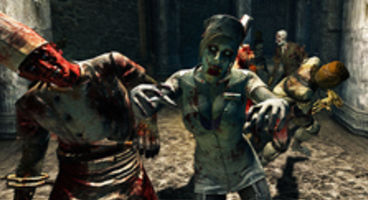 SEGA's Rise of Nightmares is now out on Xbox 360 and Kinect in North America, and it's the first fully mature title for the motion platform as a horror game.

Producer Satoshi Ito "never thought" Rise of Nightmares would be the first mature though, as being controllerless Kinect "would match up well with horror".

"When I first saw Kinect, I immediately thought it would match up well with horror games, because it doesn’t require a controller when playing in front of the TV screen which gives players a sense of insecurity. So, I never thought it would be the first mature title for Kinect," said producer Satoshi Ito responding in a Rise of Nightmares Q&A.

"Also, this title is not solely targeting for core gamers. We believe that casual gamers who watch horror movies on weekends could very well enjoy the game as well," added SEGA veteran and Rise of Nightmares game director, Ryuta Ueda.

SEGA's aim isn't just to share the daylights out of you, says Ito-san.

"The purpose of this game is “experience.” The protagonist of this game is an ordinary man, who becomes embroiled in an incident knowing nothing, forced to move forward in a situation where a mystery is followed by another," explained the producer.

"Our purpose is to have the players “experience” this bizarre and terrifying adventure." It's a big departure from Ito-san's time with the House of the Dead franchise as Rise of Nightmares features no firearms.

"Like I mentioned earlier, the story is about an ordinary people, and by our senses, firing around a gun is not very common. Guns don’t simply grow on trees, and we’re sure it requires lots of work to obtain one in an unfamiliar foreign country."

Ueda-San added: "And we can say that it’s more “challenging” and “terrifying” to directly fight with bare hands or using weapons rather than playing by firearms equipped."

"You might start off by thinking “Wish I had a gun…,” but there’s a chance you can end up obtaining something much better as you proceed through."

Rise of Nightmares releases exclusively on Xbox 360 this week in Europe, September 9th. Do you enjoy a good skin crawling horror experience, videogamer?