07 December 2011 | By Jonah A. Falcon
Just Add Water CEO Stewart Gilray has announced on the PlayStation US Blog Oddworld: Stranger’s Wrath HD will be hitting PlayStation Network on the 27th December in all regions save Russia, Asia and Portugal.

Gilray mentioned that stereoscopic 3D and Move support was considered for Stranger's Wrath, but time limits made those additions impossible. 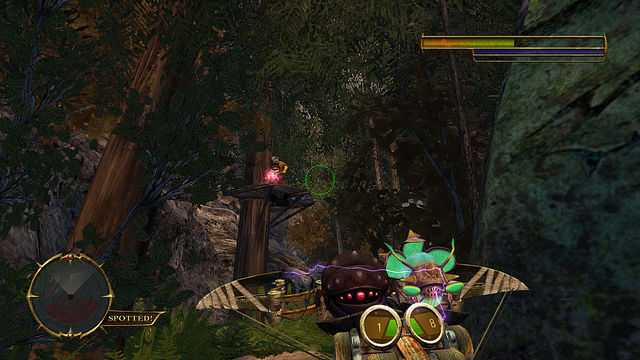 Instead, the HD version has the following updates:

* All 84 character models have been updated with increased polygon counts and higher resolution textures.

* Professor Dimble now has glasses and an academic tome.

* New female voices have been recorded for two characters.

* All environments have been given higher resolution textures.

* Most vegetation has been updated with increased polygon counts and/or higher resolution textures.

* A lot of environment now reflects in water where it didn’t before.

* Many, many pipes and barrels were rounded.

* Added Blisterz Booty’s broken crud gun to the floor by his bola’d body.

* Sekto’s Office has been changed to more closely resemble than seen in the FMV.

* All game audio (voice, sound effects and music) have been upgraded to 16-bit 44KHz from 8-bit 11KHz or less!

* All menus have been updated with a new design based on original unused concepts.

* New posters now occupy the inventory menu when no bounty is accepted.

* Added difficulty levels to the game: Easy, Medium and Hard.

* In Easy mode: Stranger has twice the health, enemies have half the health and stamina, enemies’ stamina recovers half as fast

* In Normal Mode: Stranger’s health and armour for later in the game have been re-balanced.

The original Oddworld: Stranger's Wrath was released on the Xbox to rave reviews but poor sales.