Public chat channels "will be in Diablo III, barring any catastrophe" 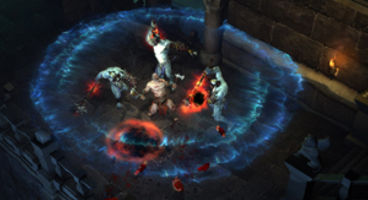 You can put down the pitchforks and torches - Blizzard's Community Manager Bashiok has admitted he was "stupid and wrong" to say Diablo III had no public chat channels.

In the light-hearted dig at himself, Bashiok confirms the public chat will be arriving in an upcoming beta patch for the action-RPG. Only some "catastrophe" could cause them to be removed.

No in-game chat!? Burn everything! This maybe the natural and acceptable reaction to hear there'd be no general chat in Diablo III, but there actually is chat after all!

"You know how sometimes you say something that's stupid and wrong and then people very reasonably get upset and create a lot of threads and discussions and demands with some pretty reasonable reasons for the thing you said wouldn't happen but then it turns out that you're stupid and wrong and the things you said are completely the opposite of what's actually true?" began Bashiok's apology and clarification post.

"Yeah. So that happened."

"Public chat channels will be in Diablo III, barring any catastrophe that requires we remove them, because they're already implemented. In fact they'll be in an upcoming beta patch so you'll get to see and play around with them yourselves. I’m not sure I can offer any explanation as to the incorrectness of my statements, except that I believed them to be correct when I made them. I apologize, and I'll strive to not be stupid and wrong in the future."

"More info on the chat feature, and others, to come in the weeks ahead. Thanks for sticking with it, and me."

Diablo III releases on PC at an undisclosed date.