13 March 2012 | By Jonah A. Falcon
Electronic Arts will release a new update for FIFA 12 on the 14th March, the main function of which is to aim to stop the current Ultimate Team phishing scam.

According to Electronic Arts, it will now only be possible to send trade offers to people on your friends list, and upon entering the Ultimate Team on your console for the first time after the update, you will be required to provide a unique answer to a security question. Anyone trying to enter the account from a different console will be required to answer this question. 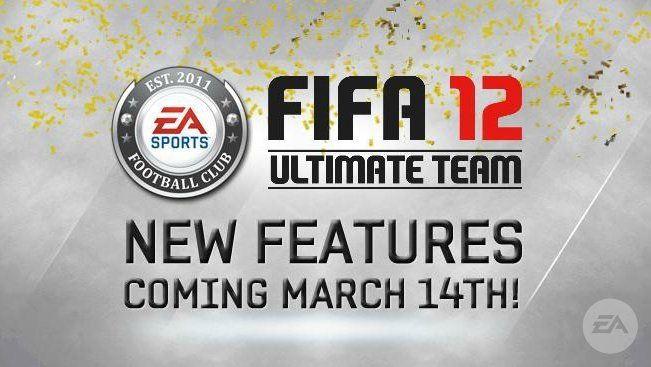 The rest of the FIFA 12 Ultimate Team update includes:

* To better keep you protected, you can now only send trade offers to friends.

* A new trade notifications system will be deployed.

* A new design will be released for the Trade Feed.

* We have increased the maximum bid price from 10 million coins to 15 million.

* New Prize types have been added with additional Packs and Items.

* The prizing on offer for each tournament will now be displayed before you select one to enter.

* A new tournament reward structure has been introduced, varying the prizing depending on the number of times a tournament has been entered.

* We have introduced new tournament types, with entry criteria that allows for teams of mixed leagues, mixed nationalities or mixed clubs.

* A new tournament type will only allow users a limited number of attempts over time.

* Your team’s eligibility for tournament entry is now visible on the Squad screen, and requirements that aren’t being met will be highlighted.

* You’ll now find a new Squad Wizard to help build and/or fill out your squad quickly.

* Introduced the ability to copy a squad to create variations more easily.

* The chemistry links between players will now be more obvious, with a bad connection coloured red, mediocre coloured orange, and good remaining green.

Team of the Week

* You can see the full Team of the Week and navigate and interact with it.

* You can now bring up Team of the Week player bios.

* You’ll have access to new navigation to change between current and previous Teams of the Week.

* We have fixed the end-of-game disconnection error affecting some PS3 and PC users.

* A recently discovered bug that allowed an Ultimate Team player to gain control of another player’s team has been fixed.

* Coins will no longer be awarded if a user Alt-tabs away at the beginning of FUT games on PC.

* Addressed a disconnection bug if a user tried to add more than 100 cards to their Watch List.

* Fixed a problem where the user receives a Debug Text error message in the Watch List when attempting to bid on an item that has already expired.

* EAS FC Challenges can now utilise Be A Pro to have player-specific objectives, rather than having to play as the entire team.

* EAS FC Challenges can now start from a Yellow Card scripted sequence, so you can be thrown into a crucial part of the match from the get-go.

* EA SPORTS Football Club is now a selectable option in the Main Menu bar. Selecting it will open up the EAS FC hub.

* A new visual effect will now appear over the top of the EAS FC widget when you level up.

* Completing an EAS FC Challenge was not awarding XP for some people. This has been fixed.