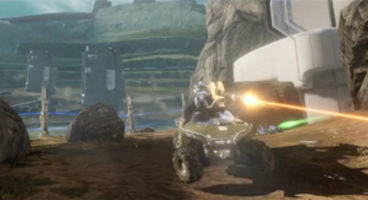 Microsoft and 343 Industries is "currently investigating" the situation where Halo 4 gamers have found themselves banned after having got hold of the Crimson Map Pack following the 'leak debacle'.

The Crimson DLC appeared on the Xbox Live Marketplace at no cost, before Microsoft moved in. Those banhammered blame Crimson, but 343 Industries say it isn't at fault.

Users seem to point the finger at the screw up over the Crimson DLC being 'leaked' at no charge, despite Microsoft claiming it was part of a marketing campaign stunt, or whatever.

"We are not permanently banning players for previewing or purchasing the Crimson Map Pack," posted a 343 Industries rep on Halo Waypoint. "We are currently investigating the recent reports of permanent matchmaking bans." A lot of Halo 4 gamers are less than amused by this spate of bans with no reason cited.

To be on the receiving end of a ban you'd need to do things like manipulating network conditions, fiddling with an Xbox 360 console through modifications, cheating, mass quitting, just idling in matches, or claiming to be a Microsoft staffer.

"We will provide further updates tomorrow. Thank you for your patience," said the rep. The Crimson Map Pack, which added three new maps, released last week on December 10th.