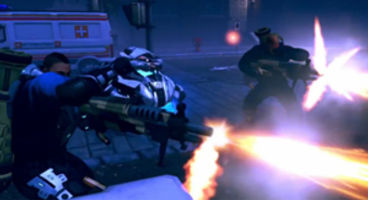 Lead designer Jake Solomon from Civilization developer Firaxis talks about XCOM: Enemy Unknown, and why it absolutely needed to be a turn-based strategy; it's all because of death.

In XCOM boots on the ground can suffer perma-death, and that wasn't ideal for real-time action. Soloman says the team "messed with everything" except it being turn-based.

The perma-death threat is a 'must have' for the XCOM series, argued the lead designer, which means only turn-based combat can do it justice as otherwise it's open to being problematic.

"At different points my doubts were stronger I suppose, but yeah it’s interesting because as a designer you need to have a fair amount of confidence at the beginning, as you’re saying a bunch of things and you have no idea if they’re going to work," Jake Soloman said in an interview, discussing XCOM's design ideas.

"But then you also need to be very open to saying ‘that thing we just did… that was terrible, we should change that’, and so you’re always treading that line. The one thing I never, ever doubted was that the game had to be turned based."

"Like, I truly have made a lot of prototypes of this game and all of its game systems. We have messed with everything – every single system in there, I guarantee we’ve messed with – except for the fact that it had to be turn-based."

Bring turn-based was a line in the sand feature simply because death means permanent death in XCOM.

"The reason is just because you have to have perma-death in this game," he said. "You just have to have it. The fact that your soldiers can die creates these real consequences in the game, and these really emotional highs and lows. Some games move in a different spectrum where you know that if you lost, you’d be OK with it and you’d just restart."

"That’s fine because those games are fixated on telling a story, but then in XCOM because you know you can lose, your emotional highs ad lows are much bigger. That’s because when you succeed you feel great, especially if all your team has survived too, or say you survive with just one guy left."

"But then when your favourite soldier dies, that’s a really emotional moment. You take a look at the game and say emotionally, ‘Wow, that totally f*cked me’. The one other place you do get that same kind of high is in multiplayer games, and that’s why I think they’re so popular."

The Firaxis team have done what they can to get us to bond with our XCOM squad, which includes advising us to name them something personal to the player, like relatives or close friends. The turn-based combat remains tense, notes Soloman, but is also fair to the player. If a guy dies, you'll know why they died.

"...I had to have perma-death, because nobody’s going to accept a soldier dying if it’s real-time and you’re moving the soldier at that moment and he gets shot. ‘That’s an AI problem’ they’d say, and they’d feel cheated by the game."

"But with turn-based, it’s a fair game. When the player turns a corner or does anything, then they take damage or get their soldier killed, the player can say, ‘I did that’, and ‘I could have done something differently.’"

XCOM: Enemy Unknown releases on Xbox 360, PS3 and PC October 7th. A demo is now available to sample and can be downloaded through Steam. Check out the full interview between Jake Soloman and VG247.