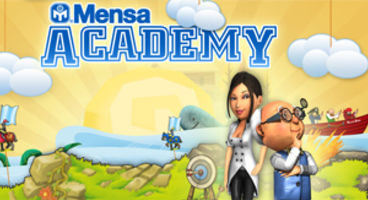 It's from the experts in "measuring and fostering intelligence." We're given Play, Coach and Test modes to help beef up our brains with knowledge: Numeracy, Language, Logic, Memory, and Visual.

Mensa Academy will be coming to the UK and other PAL territories this July 27th for 3DS, Wii, PC, Smartphones and eventually consoles, Android and iOS.

“We have teamed up with Barnstorm Games to bring this title, developed in cooperation with Mensa, to market in the UK and PAL regions. Mensa Academy is the most credible game of its kind to date from the definitive experts in the field of measuring and fostering intelligence. The power of the mind is fascinating, the real challenge is how to best maximise its potential. Mensa Academy tangibly tackles this in a user-friendly way, whilst providing hours of entertainment.”

Mini-games and challenges will span across 5 disciplines; Numeracy, Language, Logic, Memory, and Visual.

“It’s fantastic to be working with Barnstorm Games and Square Enix to bring Mensa Academy to the market,” said John Stevenage Chief Executive, British Mensa Ltd. “Not only does the game encourage brain training and challenge the mind it is a great deal of fun for all age groups.”

We could always do with more grey matter exercise equipment.