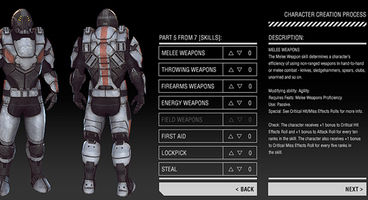 Post-apocalyptic RPG After Reset is still crawling through the crowd-funding desert wasteland with the odd canteen of water (pledges) thrown its way. Black Cloud has just detailed their planned skills system.

The team go through combat, activated, selected mode, passive and social skills for our characters and what impact they'll have, as well as requirements. It's for the stat lovers.

However the indie developer has taken to accepting direct pledges and plan to release on PC, Mac and Linux with the game built using the Unity 3D engine in single player and co-op modes. Black Cloud promise a non-linear story set hundreds of years in the future after the 'Reset' that decimated Earth.

Skills are determined early on by the species of our character and are also accumulated throughout the course of our adventures through reading books, question completion, equipping special items and of course gaining levels, with Black Cloud boasting hardcore mechanics using the "best traditions of DnD and SPECIAL".

Check out the latest After Reset update for more about the game's Skills system. Direct pledges are available.