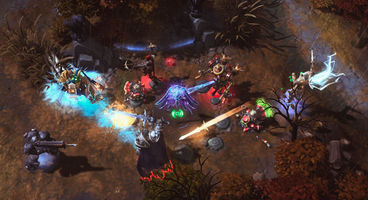 Blizzard MOBA Heroes of the Storm has maybe just averted its very own storm in a teacup moment as game director Dustin Browder has apologised for a 'curt' response he offered in an interview.

The question was about the portrayal of the female characters in Heroes of the Storm, to which he had replied: "We're not running for President." Those are incendiary words in PR-speak.

Browder has acknowledged his faux-pas and issued an apology for his less-than-ideal response to a question that's gaining more wide ground within the industry.

The interview was between Rock, Paper, Shotgun and Dustin Bowder:

RPS: I have to add, though, that comics might not be the best point of reference for this sort of thing. I mean, it’s a medium that’s notorious – often in a not-good way – for sexing up female characters and putting them in some fairly gross situations.

Browder: We’re not running for President. We’re not sending a message. No one should look to our game for that.

RPS: But it’s not even about a message. The goal is to let people have fun in an environment where they can feel awesome without being weirded out or even objectified. This is a genre about empowerment. Why shouldn’t everyone feel empowered? That’s what it’s about at the end of the day: letting everyone have a fair chance to feel awesome.

It was there the interview ended as their time had run out. MOBA communities have been notorious for incredibly venomous verbal attacks, with females an easier target, with League of Legends even going so far as to show the math on how teams do better when not bullying each other over mistakes.

"I responded poorly to a statement the interviewer made about over-sexualized character designs in games, and I want to apologize for that," Browder wrote. "This is a serious topic and I don't want anyone to think that I, or anyone else at Blizzard, is insensitive about how we portray our characters."

Recently Crytek draw attention for admitting they 'pandered' to regional misogyny when it came to female soldiers in Warface, like in Russia and China, where female counterparts were weaker in appearance or sexualised.