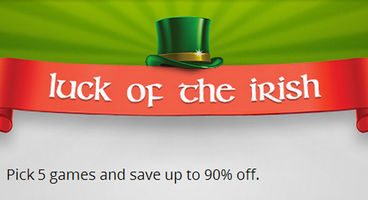 PC DRM-free rebels over at GOG.com has announced 'Luck of the Irish' which has 25 games between $2 and $4, or you could always try your luck with the 'Pot of Gold' for $2 and see what you get.

Also GOG.com will not be implementing regional pricing given the huge wave of community feedback, after their 'Fair Price' was going to be sacrificed for more DRM-free games.

They soon realised that Fair Price, which keeps all games priced exactly the same regardless of region, was just as important as providing them without any DRM.

"We're not perfect, we're exploring new frontiers, and we make mistakes," said GOG.com in a statement.

"We thought DRM-Free was so important that you'd prefer we bring you more DRM-Free games and Fair Price was less critical and that it could be sacrificed in some cases. The last two week's worth of comments in our forums (nearly 10k!), show that's not the case. We didn’t listen and we let you down."

"We shouldn't sacrifice one of our core values in an attempt to advance another. We feel bad about that, and we're sorry. Us being sorry is not of much use to you, so let’s talk about how we will fix it."

DRM-less games remains their highest priority but they won't attempt to cave in to regional pricing demands of publishers etc. just to get their catalogue on GOG.com. "Abandoning fixed regional pricing means it will probably take longer to get some games, but you've made it clear that sacrificing fair pricing for more DRM-free games isn't acceptable."

Should GOG.com fail to convince the big boys that flat global pricing is the way forward then they'll take the bold step of assuming the cost difference themselves, and charge the flat rate anyway.

"We will adamantly continue to fight for games with flat worldwide pricing. If that fails and we are required to have regional prices, we will make up the difference for you out of our own pockets. For now it will be with $5.99 and $9.99 game codes. In a couple of months, once we have such functionality implemented, we will give you store credit instead, which then you will be able to use towards any purchase and cover the price of it in full or partially," they continued.

"Effectively gamers from all around the world will be able to benefit from the US prices."

They still intend to introduce local currencies as some have trouble paying for things natively in USD, but paying in dollars will now remain an option. "From the very beginning our intention was to make things easier for users whose credit cards/payment systems are not natively in USD. The advantages are simple because the price is more understandable and easier to relate to. There would be no exchange rates involved, no transaction fees, and no other hidden charges."

"However after reading your comments, we realized we have taken an important element away: the choice. In order to fix this, we'll offer the option of paying in the local currency or the equivalent in USD. This way, how you pay is always your choice."

They conclude: "The bottom line is simple: there may be companies that won't work with us (although we will work hard to convince the most stubborn ones ;). Yes, it means we might miss out on some games, but at the same time GOG.com will remain true to its values and will keep on offering you the best of DRM-free gaming with Fair Prices."

Check out GOG.com's Luck of the Irish sale that runs until Friday, March 21st.