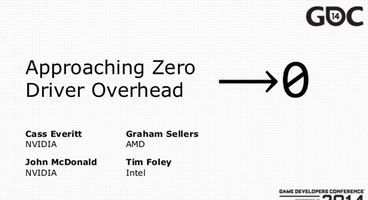 Driver overheads can be cut by 10% with this "open, vendor-neutral standard" that OpenGL provides, and give 1.3 times better performance, or "7 to 15 times more" if tuned.

It's ideal because it works across all platforms and cuts through overheads meaning greater performance - bang for your polygon bucks. Is it time for a revolution?

"If you want to get a developer’s attention, all you need to do is start dropping whole numbers," he posted. "Offer something that’s not 1.2 times better — but two or three times better — you know you’ve got them. That’s the good news we teamed up with AMD and Intel to deliver at this week’s Game Developer Conference in San Francisco."

"With OpenGL, an open, vendor-neutral standard, developers can get significantly better performance – up to 1.3 times. But with a little tuning, they can get 7 to 15 times more performance."

"Better still: the techniques presented apply to all major vendors and are suitable for use across multiple platforms. And they brought demos, showing what these improvements mean on real world systems," he continued.

"That’s because OpenGL can cut through the driver overhead that has been a frustrating reality for game developers since the beginning of the PC game industry. On desktop systems, driver overhead can decrease frame rate. On mobile devices, however, driver overhead is even more insidious, robbing both battery life and frame rate."

Check out Ashu Rege's Nvidia blog for the slide presentation given at GDC 2014.