UK-based Element Gaming is making a strong push to mark out some territory in the video game peripheral space, with a particular focus on the market for PC gamers. We’ve looked at some of their stuff in the past, such as their monitor mount, which we loved - but today we’re going to take a look at part of their range that’s much more vital for any and every PC gamer - gaming keyboards.

We’ve spent a little time testing the easily-affordable Element Gaming Thorium 100 gaming keyboard, its more expensive brother, the Beryllium Mechanical Gaming Keyboard - and have some thoughts for those in the market for something new on the keyboard front. Without further ado, here we go…

The Thorium 100 is the easier of these two new products to write about - in large part because it’s simple itself. With a RRP of just £12.99, this is a gaming keyboard at its most basic level. It steers clear of LED backlights and other such gaming features and keeps it simple.

The feature-set of the keyboard is akin to the typical Microsoft keyboards you’ll find packaged with most new pre-built PCs, but the design and style of it is plainly meant to ape more popular and more expensive gaming keyboards for the ‘gamer’ look. For those who don’t want to splash out on an expensive keyboard but owant the look, this might actually prove ideal. In addition to the typical keyboard layout, the Thorium 100 also includes six dedicated multimedia keys for things like play, pause, next/previous song, and volume.

Where the Thorium 100 sets itself apart is in its simple key-swapping setup. A special tool is provided to yank keys off the keyboard, and a number of brightly-coloured blue replacement keys are provided. This essentially means you can replace regular keys on the keyboard with a key that leaves it more highlighted - and while this is plainly intended for WASD, you could potentially do this to other basic keys throughout the board.

While you obviously can’t expect the world for the price, the Thorium 100 has a solid build quality and some interesting little design choices - there’s a nice two-tone black and blue bit of visual styling, while the keys - either by design or through manufacturing - feel a little more coarse and textured, a touch I actually ended up rather liking once I got used to it.

It is a cheap, lightweight keyboard, however, and is perfect for throwing in your bag to take somewhere without a worry. Most importantly, it performed well throughout my tests - though this of couse isn’t mechanical and that should be kept in mind.

The Thorium 100 is available now via eBuyer and Amazon. 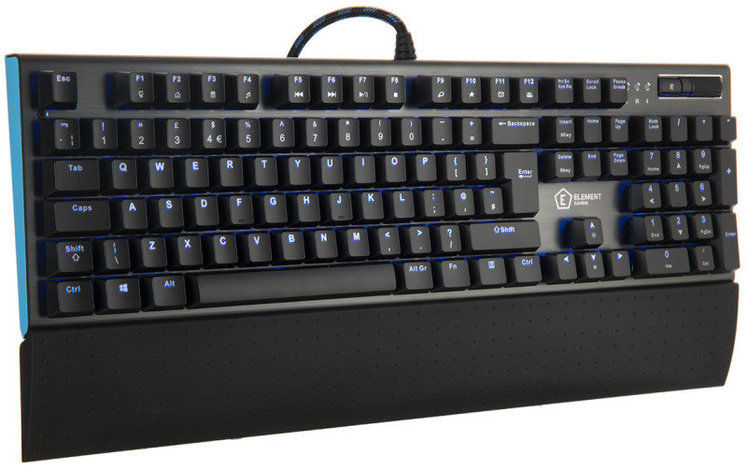 While Element Gaming also has two other ‘Thorium’ models on the market, their top-range keyboard actually has a different name - the Beryllium. Priced at £80, this keyboard is obviously a significant step up from the Thorium 100 - but in the grand scheme is also one of the more reasonably priced mechanical keyboards on the market.

For that price you get RED mechanical key switches beneath the keys (a solid starter for those new to mechanical keyboards), full LED backlighting including patterned backlight settings, and a volume slider with a mute hotkey. Also included is a satisfyingly textured snap-on, snap-off wrist rest, while the keyboard has a solid, hefty construction complete with metal parts, a braided cable, and gold-plated USB connections. It feels solid. 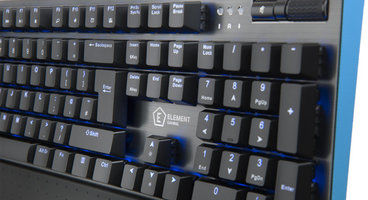 Surprisingly, Element Gaming has opted not to bother with a wider range of hotkeys on this product, presumably coming to the conclusion that a lot of gamers don’t actually use them.

Included instead is an alternative most often seen on notebook keyboards - a function key dropped onto the bottom right of the main key layout which, when coupled with the Function keys, can do things such as navigate media, open your default mail program, or handle on-keyboard functions such as toggling the backlight. It works just fine, and proves that individual dedicated hotkeys aren’t always necessary.

The backlight isn’t full RGB, and as such can only manage varying brightnesses of Element Gaming’s trademark blue - but it’s a good-looking shade that glows well beneath the Beryllium’s raised-key design. Where many keyboards choose to sink their keys into their design, thus not exposing their bottoms, the Beryllium perches them atop its design - something which actually strikes me as a great deal cleaner, at the very least. It does however mean the backlight functions and looks different - not necessarily better or worse, just different, with the light appearing more directly delivered than thrumming beneath the keyboard’s surface. 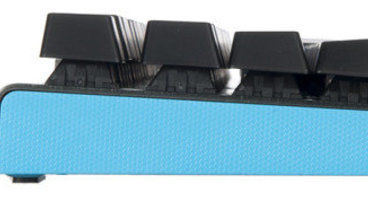 Like the Thorium, the Beryllium ships with a small number of replaceable keys, all of which are plainly designed for gaming functions. If you’d prefer your WASD or arrow keys to be a more stand-out colour, provided are several for key gaming buttons in Element Gaming’s trade mark blush-ish, turquoise-ish colouring.

Each key is laser-etched, too, meaning the backlight will shine through them, a nice touch - though I wasn’t too enamoured with the bright and I think rather garish choice of alternative key cap colour.

Beyond the swappable keys, the Beryllium isn’t a keyboard packed with many gaming-specific features. As a cheaper mechanical option it leaves some of that behind, but maintains the quality that one expects from a mechanical keyboard. N key rollover ensures that keypresses are registered correctly - useful for hardcore MMO, RTS or MOBA players - and the keyboard is generally of a high quality that makes typing an enjoyable experience, even if the keycaps feel a little more cheaply built than the rest of it. By using default RED switches, however, these same key caps can also be replaced - a handy feature.

Given the prices that most entry-level gaming keyboards with mechanical keys run for, the Beryllium is a great value little package. While not everything about it is perfect, many of the smaller touches such as the keyboard layout and the provided detachable wrist-rest add up to make it a great value product - but one shouldn’t expect it to stand up to its more expensive rivals. With all that said, we can happily recommend it.

The Beryllium Gaming Keyboard is available now via eBuyer and Amazon.