28 May 2008 | By Graymur
Vivendi Universal and Massive Development have released the 1.008 patch for World in Conflict. This patch includes new features, game balance changes and bug fixes. 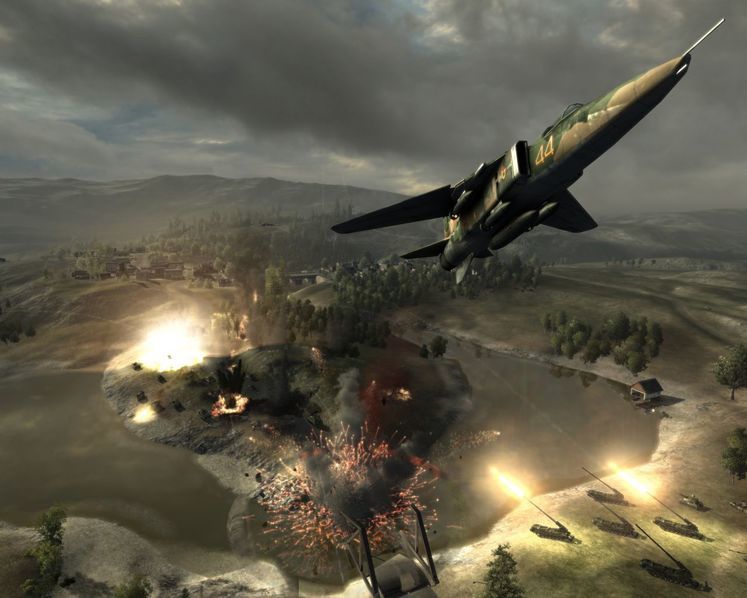 This eighth update for World in Conflict fixes balancing and bug issues and introduces some new features, like improved in-game voting, new ignore functions and improved network code stability. There are also several additions to Massgate, including new banners and new explanatory texts for missing content.

- Extrapolation added to the network code. This should decrease lag caused by high packet loss. To disable extrapolation, append “-noextrapolation” (without the quotes) to the target path of the WIC shortcut.

- Expanded the ignore functionality on Massgate to cover clan challenges and chat rooms.

- Unit shields will now always be enlarged on mouseover regardless of selected unit.

- Unit movement arrows are now more visible on the Megamap.

- Added a hyperlink pop-up when the client is missing map or mod content.

- Remote admins can now switch a ranked server to unranked and back.

- Improved power of Demolition Engineers’ Demolition Charge. It now destroys most bridges with one charge.

- Fixed discrepancies with US Medium Tank and US Light Tank view ranges compared to USSR and NATO.

- Fixed discrepancy with the duration of the USSR Medium Artillery special ability compared to US and NATO.

- Fixed a bug that caused disconnects with wireless network cards.

- Friendly fire warnings are not triggered by stray bullets anymore.

- Fixed a bug that caused units dropped by Tactical Aid to be blinking and untargetable.

- Fixed buildings on several maps that could not be targeted by air units.

- Fixed fortifications on several maps that could become untargetable.

- Fixed a bug that caused Kick-vote to be active in clan matches.

- Fixed a bug that caused Kick-on-idle to stop working.

- Fixed a bug that required spectators to click “ready” for servers in match mode to start. Only players in teams count now.

- Fixed a bug that caused the TA cooldown to not reset when matches started in match mode. It should no longer be possible to deploy Tactical Nukes prematurely.

- Fixed a clan challenge bug that caused the wrong number of members to be shown as online on the clan you challenged.

- Fixed a crash related to map voting and custom maps.