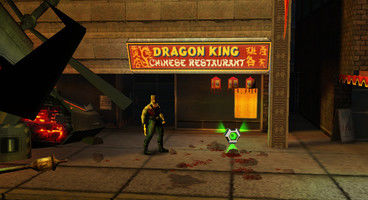 After some few days of R&R, Duke Nukem is ready for some more action! Our favorite ass-kicking, wise-cracking babe magnet returns to his side-scrolling platformer roots, but this time in 3D. A mad scientist, Mech Morphix, is using a mutagenic substance called G.L.O.P.P. to turn New York's sewer-dwelling life forms (which includes alligators, obviously) into deadly monsters. Duke, as expected from a popular hero, sets out to stop Morphix from taking over the Big Apple, golden Desert Eagle in hand. During his quest he will get to rescue some chicks, who are more than happy to see Duke save the day.

Blake Stone: Aliens of Gold is a first-person shooter, created using the Wolfenstein 3D engine, with some improvements - most notably interactive NPCs and an auto-map feature. The game was very well received initially but, after some time, other more recent titles stole the spotlight. It remains a solid title for any FPS fan and a must-have for the nostalgic type. You play as British Intelligence agent Wills Stone III. Your mission is to stop Dr Goldfire from amassing an army whose sole purpose is to conquer Earth.