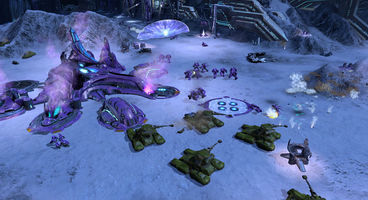 Here is detailed information on what this add-on will contain:

*Barrens (1v1 Map): Difficult terrain channels units into killing zones. The side that controls the Forerunner artifacts will have the advantage.

*Blood River (1v1 Map): Secure base locations on nearby cliffs overlook this naturally red-tinged river. The soldiers that fought over its two narrow crossings gave the river its name, which has since taken on a greater meaning.

*Glacial Ravine (3v3 Map): A snow-topped mountain range forms a natural barrier that cuts this region in half. Control of the two energy walls at the narrow central pass often determines the outcome of the battle, though clever use of the Sentinel Factories may play a role as well.

The four new Achievements worth a total of 100 points are:

*Tour Coming Through: Hot drop 50 squads to your Covenant Leader in a single game on Memorial Basin (30 points)

*Never Leave a Man Behind: Finish a game with 5000 net resources contributed to your teammates on Barrens (15 points)