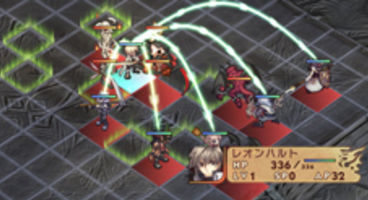 Aksys Games have decided to spread their upcoming strategy RPG across both PSN and XBLA, for fear of WWIII from "apparent favoritism".

At least that's what the time traveller warned them, they say. Record of Agarest War will be available in spring for Xbox 360 and PS3.

"In truth, we had Record of Agarest War ready to go up on the PlayStation Network months ago," said Ben Bateman of Aksys, beginning their press release, reports 1UP.

"But when a haggard man emerged from a ball of crackling energy that materialized outside our office with dire warnings from a dark future, we decided to reconsider. As it turns out, a PlayStation Network-exclusive release of Agarest was - or rather, would have been - the catalyst for World War III."

"The gaming community was torn apart - literally - by this apparent favoritism, and from that schism poured the infinite minions of Satan himself, the Lord of Lies."

"The man told us, his eyes blank with the 1000-yard stare, of the horrors of this future war. He had been sent back in time, the last hope of a desperate human resistance, to prevent what the people of this desolate future Earth called, simply, 'The Breaking.'"

"As the last spark of life passed from his body, broken and battered by his journey through the time vortex, we swore to honor his final wish." And thus Record of Agarest War became multi-platform, and world peace rang out to the masses, well, until Rockstar decides to make a future GTA a Sony exclusive again - then we're screwed.