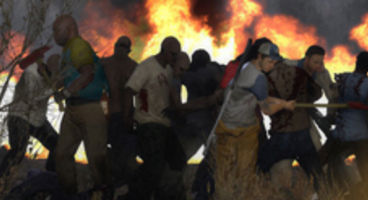 The infected co-op survival shooter officially releases tomorrow over Steam, and so developer Valve has 'defined' its global midnight.

That is to say, what time it'll unlock for others when it reaches 12:00 AM Eastern Standard Time. It's out in retail shops this Friday also.

"Due to an ongoing debate in the office and online as to whether "12 AM" means noon or midnight (we're still sticking with midnight), it's been more challenging than we realized to tell people when exactly our game will be available," blogged Valve.

"Factor in the Earth rotating around the sun, daylight savings time, some of our fans insisting on using the Mayan calendar, and we're just going to try and make this as specific as possible," they went on. Pfft, obviously the Earth doesn't move - it's the Sun.

Talk of 'moving planets' and witchcraft aside, here's the list:

This is only if you've put your order in with Steam, otherwise its waiting until the end of the week for you when it goes on sale for Xbox 360 and PC November 20th.