Splash: You "make your own rules" with Brink's open plan campaign 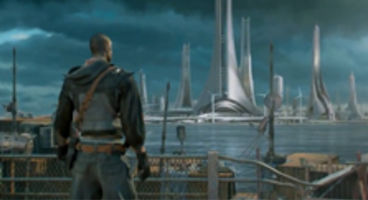 Creative director Richard Ham of Splash Damage has been talking up sci-fi Brink, their futuristic city shooter which has campaign 'rewinds'.

You pick a side in the civil war aboard Ark, and then have at it how you want. Once you're done it rewinds so you can play for the other team.

“At the beginning of the game, you decide which side you want to fight for in the Ark’s civil war,” Ham told GameSpot, talking of the authoritative and rebellious sides to the civil war taking place on the giant floating metropolis Ark.

"What’s interesting is that once you finish that campaign, the story will rewind, and you’ll get to play it from the other side," he explained. You won't lose player progression.

"While you’re going through either of these campaigns, you can jump around in the storyline at any time, however you want, and even jump campaigns if you prefer."

“Maybe you’re stuck on a tough mission and want to skip ahead, or maybe you saw a friend come online and you want to play with him, even though he’s on the other campaign… We don’t tell you how to play the game; you make your own rules.”

Splash Damage's Brink sounds almost too darn good to be real. It's releasing for Xbox 360, PS3 and PC this autumn sometime hopefully. September 7th was listed but Bethesda dismissed that as "speculative" at best. Is Brink on your wanted list?