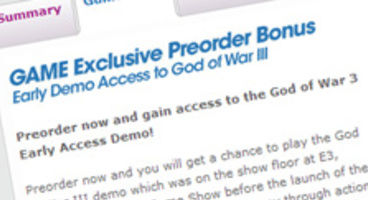 There is no official public date for God of War III's demo yet, confirms Sony. However GAME pre-orders will net it early in the UK before Feb. 25th.

This demo of GOWIII is exclusive to GAME and not an indication of a public release on PSN, and is "only active until" February 24th reveal Sony.

Sony clarify: "The GOW3 demo being given away with Game is only active until the 24th, preorders after this date will not receive it. There will be a demo on the PSN but the date is still TBC," said the corporate giant, reports CVG.

No PSN party just yet...