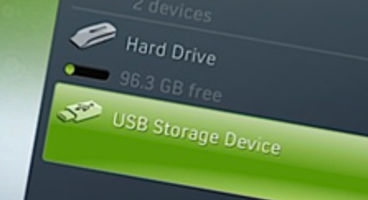 This spring could see the Xbox 360 through a "system update" fully support USB storage devices, according to obtained leaked documents.

That would mean no more rubbish Memory Cards with just 512MB, but full on super sized USB drives. Only two can attach and limits at 16GB.

That's right you can do away with those highly over-priced pieces of junk that Microsoft dare to call a 'Memory Card' in this day and age - but there are artificial limitations imposed. For instance the USB drive can be over 16GB but the console won't use more than that.

Also you can only have two USB drives connected to the Xbox 360, with additional simply rejected. This is to keep Microsoft's firm grip on the Hard Drive business intact for their next-gen system, which is rather crafty and sly.

Joystiq says they've got a hold of the documents about the "USB Mass Storage Device Support on Xbox 360" and has had it all verified by no less than two sources.

A senior software engineer at Microsoft states in the document that due to "increased market penetration of high-capacity, high throughput USB mass storage devices, a 2010 Xbox 360 system update" will allow users to load game data from USB drives.

"USB storage devices may, however, have far greater memory capacity than MUs (at the date of writing, the largest MU is 512 MB), and may therefore support previously infeasible operations-such as installation of a full disc-based title."

You can either let the Xbox 360 prepare the USB drive itself or run a 'customised' partitioning which lets you preserve other data you may wish to keep, like music.

This is certainly a major step in the right direction what with Microsoft blocking third-party storage devices through firmware not long ago and causing a huge uproar.

It's a shame about the 16GB and 2 USB device cap though.