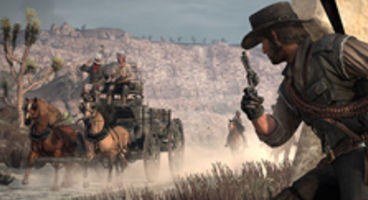 No good scoundrel cheaters in Red Dead Redemption are the focus of Rockstar Games as they saddle up a new title update, to deliver justice.

It will arrive "within the next month" to XBL and PSN, and Rockstar will ban obvious gamers for "a period of our discretion." Free roam less grieved?

"We’d just like to let all fans and players of Red Dead Redemption Multiplayer know that we're aware a few rotten apples persist in the online world, trying to make the experience unpleasant for everyone else," posted Rockstar, reports Eurogamer.

"Obviously, these Multiplayer modes can be great fun when everyone is on the up-and-up, so to ensure we preserve the integrity of gameplay for all online, we are actively working on new features to counter against the isolated incidents of abuse that go on."

"Our next title update, planned for release on both Xbox LIVE and PlayStation Network within the next month, will include measures to counter hacking and cheating. Those who have been detected to be cheating beyond a shadow of doubt will be promptly banned from the Red Dead online world for a period of our discretion," added the studio.

Also they will introduce a new feature to multiplayer free roam to cut down some of the grief others cause. Those troublesome bullies who kill players just for the fun of it will get into trouble when they hit a streak of 6, and will become 'Most Wanted' to all.

That means players get warned of their 'player-killing status' and NPC lawmen will deploy to take them out. Victims of relentless rear-kickings will be given an option to flee by Transporting to any zone of their choosing.

Rockstar will continue to "monitor the lay of the land and fight the good fight" with any revisions they feel are needed in future Red Dead Redemption title updates.