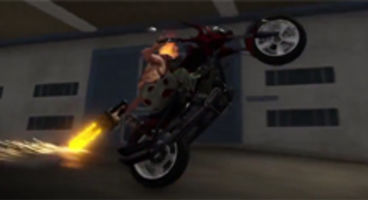 David Jaffe of Eat, Sleep, Play admits he "felt bad" telling us dirty lies over there being no Twisted Metal. He wanted it to be a real E3 surprise.

Spewing out 'no comment' would have been admitting it existed noted Jaffe, and Sony had asked him to keep it super secret. It was all worth it.

"And they used to be about surprises. And it used to be you'd come and you didn't know what you were going to find on the show floor and that was a big part of the fun and you walk from booth to booth and you just discover stuff," Jaffe told Joystiq, talking about E3.

"And the last, I don't know, four or five years everything gets either announced or leaked before and I was just like ... Sony called about four months ago and said, "Let's make Twisted a surprise and let's close the show with it."

"I was like, "Hell yeah! Let's do that." But it kind of necessitated being kind of sneaky about it. To me giving fans an actual genuine E3 surprise was more valuable to me than sort of being totally honest when people ask me questions," he explained.

"And people say to me, "Well, you could have said no comment." I'm like, "No comment is the same as saying ... it's what people say when they don't want to answer you. The other issue too is, I got to be honest with you, I've had such shit taken out of context with the press." He used misdirection to keep us off the Twisted Metal question.

"I don't have animosity with the press, but it's more like, "You know what, guys? I don't owe you shit. I owe the gamers shit. I owe them entertainment," Jaffe clarified.

"...I felt bad about it honestly because I was so appreciative of the fact that you actually reached out and said, "Hey. Is this true?" But we were three months into that surprise at that point and a no comment would have just been like, "Oh, Jaffe. He's going to be there with Twisted Metal." For what it’s worth it really did surprise a lot of fans.

Twisted Metal releases exclusively on PS3 next year. It will support 16-players online and split-screen for 2-4 gamers. Check out the delicious E3 2010 trailer.