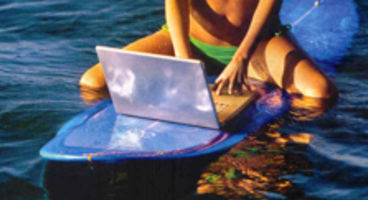 According to some 'Surfer Girl', our Xbox 360 world is going to be rocked this E3. Microsoft will unveil their rebrand and a slimmer console?

Yes they will, and they'll have two major press events says the online tattletale. Black is the new primary as it goes with "typical gloss black" TVs.

"MS will reveal a slim 360 natal bundle at one of their two (yes, two) press conferences at this year's e3," blogged Surger Girl Strikes Back, reports VG247.

Apparently those white Xbox 360s just don't look all that great next to huge glossy black flat screens, which are your typical kind of HD TV these days. So Microsoft will be going all black and embracing "a new logo" to go with it.

"The new system design is pretty neat," continued the Surfer Girl. "And Natal? Let's just say you'll probably be both very surprised and very pleased by one of the games revealed... what is it?" They tease they "Might Get Shot" if they spilled the beans.

You may notice that each capital letter of 'Might Get Shot' seems to spell out MGS. Naturally this takes us to Metal Gear Solid, of which an Xbox 360 version is inbound. The alleged 'Surfer Girl' signed off in May 2008, so is this the original's return?

An Xbox 360 redesign has been orbiting the planet Rumour for a long time so that all seems to be pretty much on the ball. Has our beloved industry gossiper, Surfer Girl, returned to us? They always did spill some of the juiciest bits of news...