Halo Wars 2 still not in plans 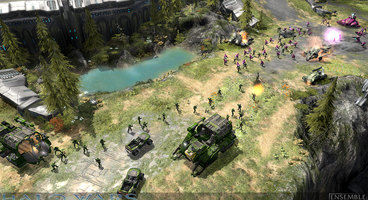 Fans of Halo Wars will have to wait longer for a sequel, as there are no plans for a new edition of the Halo-licensed real-time strategy game, despite its high sales.

Frank O'Connor of 343 Industries told CVG in interview: “The funny thing about Halo Wars is it actually beat our sales forecasts, so it was a bigger success than we expected, It was a big critical success and it’s still the number one selling RTS on consoles this generation... it was a huge success but is the will to do a sequel there? Who knows. We could do something that works on Kinect, for example. There’s no will against it but we’re not working on it right now.”

It's a little harder since the original developer, Ensemble Studios, was disbanded shortly after the game was completed, and Robot Entertainment recently bowed out of Microsoft's Age of Empires Online mid-development.