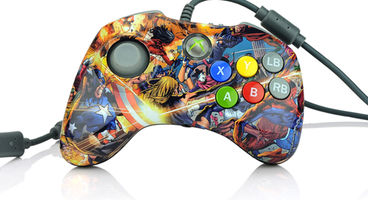 Capcom has unveiled a new sexy Xbox 360 Marvel Vs. Capcom 3-themed fighting pad, developed by PDP with the serious fighting game player in mind. The Marvel Edition Versus Fighting Pad will be available at retail and on PDP.com for a suggested retail price of $39.99 USD beginning February 14, 2011.

According to the manufacturer: As players would expect from an actual arcade machine, high quality micro-switch activators have been used for the thumb stick, which has been custom designed and constructed to feel like an arcade joystick but with the more comfortable and compact feel of a thumb pad... The thumb stick has a rubberized, over-tooled cap while the pad itself has a satin grip finish, which means that the controller moves exactly as players demand without slipping out of their hands.

The only drawback is if you're into wireless controllers - this pad is wired.

Check out the video below for the Marvel Edition Versus Fighting Pad in action.