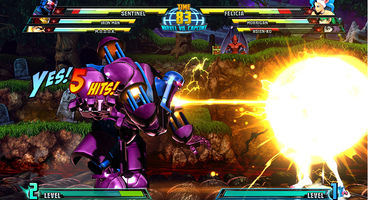 A new update for Marvel vs. Capcom 3: Fate of Two Worlds is raising eyebrows, as Capcom has rebalanced some of the character abilities to tweak the game balance.

The update was supposed to prepare the game for the upcoming Event Mode, which is expected on Friday, but it also includes some tweaks to gameplay. According to Next Gen Biz, the balance tweaks includes an enormous reduction in Sentinel’s health from 1.3 million points to 900,000, which had been the source of controversy in the game.

Sentinel has been the subject of much criticism online since the game’s launch last month, with many complaining that he is overpowered. However it is his damage output, not his ability to take hits, that has been criticised, and it should be noted that while Sentinel is the scourge of lower-level players online, he is yet to prove successful at tournament level, where balance can be fairly judged by players of equal ability.

Capcom had not responded to Next Gen Biz's requests for comment at the time of publication. Stay tuned.