Newell: Piracy is "almost always a service problem" and not price, DRM agitates 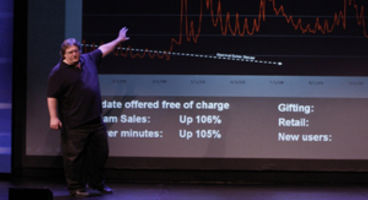 There's a "fundamental misconception" about why people pirate software, argues Newell. Valve's goal is to "create greater service" than the pirates can offer, making it a "non-issue".

Russia is notorious for its black market but Valve has tamed the motherland, and it's set to become their largest European market contributor to Steam revenue.

"In general, we think there is a fundamental misconception about piracy," said Gabe Newell, speaking to "Piracy is almost always a service problem and not a pricing problem."

"For example, if a pirate offers a product anywhere in the world, 24 x 7, purchasable from the convenience of your personal computer, and the legal provider says the product is region-locked, will come to your country 3 months after the US release, and can only be purchased at a brick and mortar store, then the pirate's service is more valuable."

"Most DRM solutions diminish the value of the product by either directly restricting a customers use or by creating uncertainty." Many turned on Ubisoft's 'always on' DRM PC system, and hackers attack their servers which rendered games unplayable because they couldn't authenticate. Ubisoft has since scaled back the system's demands.

"Our goal is to create greater service value than pirates, and this has been successful enough for us that piracy is basically a non-issue for our company. For example, prior to entering the Russian market, we were told that Russia was a waste of time because everyone would pirate our products. Russia is now about to become our largest market in Europe." Who's to blame for piracy? Publishers and DRM peddlers, say Valve.

We salute you Gabe Newell.