Puddle splashing into XBLA, PSN on the 31st January 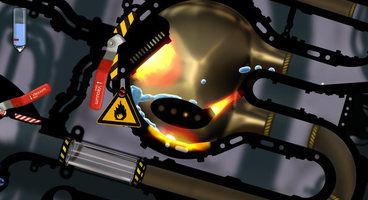 Konami Digital Entertainment has announced that indie prize-winner Puddle will be hitting Xbox Live Arcade and PlayStation Network on the 31st January. The unusual puzzle game has the player guiding a mass of radioactive fluid through a maze, trying to hazards.

In the game, the player controls a blob of liquid by tilting the entire screen, causing it to accelerate or decelerate. Players must manipulate the blob into leaping over chasms, avoiding fire blasts, rush through hairpin turns, and so on. The player scores by the amount of liquid they\'re able to save.

The game features multiple environments and themes, such as guiding a virtual puddle of rocket fuel through a hand drawn blueprint, following a sip of water through a human body, and so on.

On the PlayStation Network version that was demoed by this writer a few months ago, the Move controller was an option for tilting the screen, as was the now-dated SIXAXIS motion control, which was perfectly suited to the game style. As for the Xbox Live Arcade version, no mention was made of Kinect functionality. The game also runs well with the default analog sticks.

Puddle started a project by six students from the French videogame school ENJMIN, which won a Student Showcase prize at Independent Gaming Festival at GDC 2010.