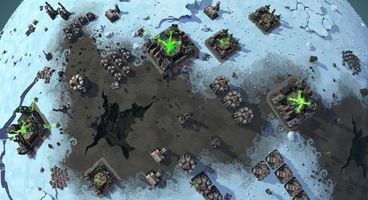 Uber Entertainment has expressed their joy at having a lot more "That was the AI!" exclamations around the office as Planetary Annihilation's computer-controlled forces become "stronger and much more evil".

They now know how to use "storage, anti-nukes, mobile AA and mobile artillery." No more fish in a barrel nuclear solutions as it has become "way more aggressive" in defending itself.

It's like it wants to make a challenge of trying to conquer the galaxy - weird. The AI has also become scalable in difficulty if you host a game, which goes for players too.

"That was the AI!" is becoming a more and more common exclamation in the office during play tests. Usually, this cry is followed by Mike laughing gleefully, as his creations wreck our bases. Planetary Annihilation's AI is stronger and much more evil -- and we'll keep making it stronger and, uh, eviler as development continues," posted Uber.

"In fact, a big chunk of our latest update is dedicated to the AI. Starting now, the AI can build storage, anti-nukes, mobile AA and mobile artillery. Also, the AI is now way more aggressive with expansions and with guarding its structures."

The latest full beta patch notes for Planetary Annihilation are available on the official forum.