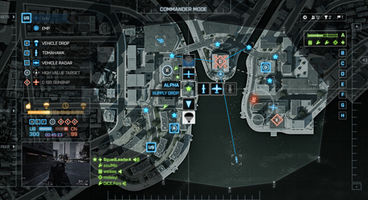 Squad members who bring some excellent soldiering to the table in Battlefield 4 will be individually rewarded with 'Field Upgrades', which builds on DICE's squad incentive scheme from Battlefield 2142.

Basically anything performed with your squad, like completing objectives or healing, will be accruing some major brownie points. Specializations are expanded beyond just one path in Battlefield 4.

Now upgrade paths hold as many as four specialisations to choose from. DICE want to promote strong squads with strong accumulative progress; squad wipes will hurt.

“If you’re a long term fan that played Battlefield 2142, you will already have an idea what these are,” blogged lead multiplayer designer Thomas Andersson. "In short, Field Upgrades are chained boosts that can affect a number of gameplay mechanics for your player. Similar to the specializations in Battlefield 3, these can for example provide you with faster sprint speed, stronger personal armor, or expanded ammo capacity."

“The idea behind Field Upgrades is to give individual rewards for squad based team play performance. You earn them through squad scoring such as squad healing, completing objectives with your squad members, squad resupplies, squad repairs, and other squad actions. Instead of one single specialization like in Battlefield 3, you can now pick from different upgrades paths, each containing four specializations. Keep the squad alive, and you will move through the accumulative upgrade path. But watch out! If your entire squad is eliminated, you will lose some of your progress.”

The hope is that this mind-set of always striving to work closely together to maximum effectiveness will empower Battlefield 4's multiplayer experience.

“Showing you how team play gives you the edge in the bigger battle is paramount for us, and it involves all elements of the game: audiovisual feedback, user interface, gameplay mechanics, and the way the entire persistence system is designed. When we tie all of these elements together with the tweaked team-based scoring, we have a game where I think everyone will find it satisfying and deeply engrossing to truly be part of a team,” continued Andersson.

DICE has posted a lengthy 'Dialing Up The Team Play' blog explaining their new approach. Battlefield 4 releases on PC, Xbox 360 and PS3 October 29th in the US, November 1st in the EU.