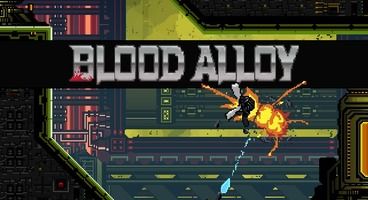 Boston-based indie developer Suppressive Fire Games has started a Kickstarter drive for Blood Alloy, which the studio calls "a 2D, urban scifi Metroidvania featuring the combat mechanics of Dark Souls as applied to gunplay (and) the dynamic speed of Vanquish." The game is being developed for PC, Mac OS, and Ouya.

According to Suppressive Fire, the gamer plays as "a young female amnesiac who, thanks to a software malfunction, regains consciousness in a high-tech laboratory" who breaks out of her stasis pod to discover secrets, wreak havoc on enemies and escape.

The game will be a Metroidvania-style game, but it will feature a stamina mechanic where attacking, blocking, and dodging all draw from your character's cybernetic energy reserves, much like Dark Souls.

The developer has set a $50,000 goal for Blood Alloy, to be raised by the 10th October. There are no stretch goals announced yet.